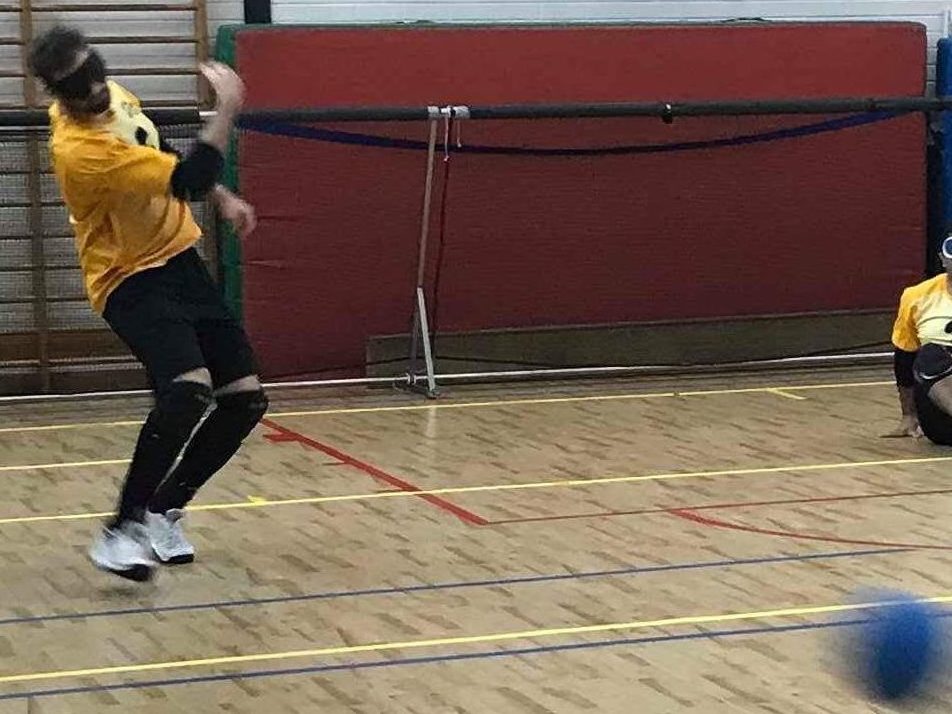 A brand new season of Goalball got underway on Saturday with four brand new teams taking to the court. The first match of the day got off to a rather unique start with Malvern East lining up against cross town rivals Yarraville. Malvern East were in full control of the match right from the first whistle with a solid opening line up of Brooke Carter, Sam Valavanis and Emma Jago facing off against a depleted squad from the west. Half of Yarraville’s line up was absent from the start of the day due to sickness or being stuck in traffic. This left the arduous task of defending a nine metre wide goal down to just two players. Although Thanh Autran and Aiden Quilty from Yarraville adopted a new defensive line up to try and cater for the extra court each player needed to defend, Malvern East would get a series of breakthroughs to give them control of the game early on. Yarraville’s third player would arrive part way through the half but under new rules set down by the Victorian Goalball Association, they would be unable to join their teammates on court until half time meaning they could do little more than spectate proceedings as the game went on. With just under five minutes to go in the first half, Malvern East would get an early finish to the start of their season slotting a tenth goal past Yarraville taking the score to 10-0 and ending Game #1 with a mercy victory.

In the Reply match later that day, Yarraville now with four players on their team were determined not to have a repeat of the opening match. Autran and Quilty now joined by Clare Whelan and one extra faced off against Carter, Jago, Valavanis and Yuto Kawai. Malvern East had luck on their side in Game #3 as although Yarraville were able to place offensive pressure on Malvern East constantly getting fractures off Jago’s toes in the centre, there was not enough pace left on the ball to get it past Carter safely backing up on the wing. The second half combination of Carter and Kawai on the wings backing Jago in the centre proved too much for Yarraville in the end as the match again ended early at 12-2 to Malvern East deep into the second half.

Over in the Men’s Division, again a unique start was had to the season. South Kingsville took to the court with three players in Thien Autran, Dan Pritchard and Colin Townsend ready and raring to go while the side from Malvern was starting the day short. Sam Byrne and Shaun Whitely who had already wintensed Yarraville go down in one half when they attempted a two person defence were up for the challenge that was before them. Everyone was surprised to find that Whitely and Byrne were the first to score and in fact were not far off the mark at half time. Now with the second half underway, Malvern had two additional players added to their mix in Dean Calder and one other. The quartette battled their way through the second half but were just 2 goals away from a mercy when a super sub was called. Byrne coming back onto the pitch was the start of a fight back for the Fluros scoring the next three goals to bring Malvern back into the game. South Kingsville had no answers and went straight into a defensive mode trying to hold the surging Malvern at bay. Malvern were getting closer and closer but the final buzzer sounded and the scores saw Malvern just three goals shy of South Kingsville. A win for the men in grey but only just.

Final match of the day and Malvern with a full squad were primed and ready. Making use of their substitutions, Malvern seemed to be toying with the tiring South KIngsville. It looked like spectators were up for a close game if the half time scores were anything to go by but looks can be deceiving. Midway through the second half, Malvern put their strongest attack on the court and went on their way to finish off South Kingsville. Feeling the pressure, South Kingsville began to break apart. At nine goals down with the match riding on the line, South Kingsville gave away a penalty. All that stood in Malvern’s way of an early finish was a single defender. Pritchard for South Kingsville took guard in the centre of his team’s defensive area. Malvern proceeded to throw the ball down their left side line and miraculously, Pritchard made the save. The game limped on but the inevitable occurred with Malvern gaining a ten goal lead and ending the match just seconds ahead of full time at 18-8.

The second week of Winter League will see the four sides back in combat across Saturday the 28th of July with the Junior Program commencing at 9:20am followed by the League matches from 11:00am. A full line up of the day can be found on Facebook at www.facebook.com/events/249036282544319/. Ladder and Week 1’s results below.