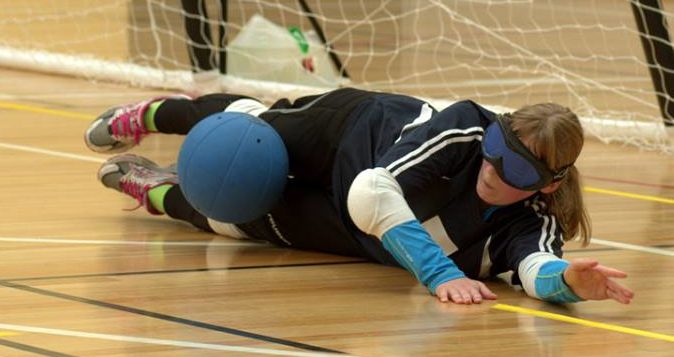 Winter has been colder and harsher for the Mixed Division team in royal blue than any other side in the league competition. From their 6 matches, Yarraville are yet to post anything more than losses in the results column. This side is just caught up the Yarra without a…

Times are only going to get tougher as they prepare for Week 4 of competition missing key strike thrower Sinead Mooney and main centre Clare Whelan as they make their way to Brisbane for a tournament hosted by Goalball Queensland. The brunt of the workload falls onto teammates Thanhtuoc Autran and Aiden Quilty as they scramble to find a third player to take up a position on the court against the dominant Malvern East.

The Maroons are also not without loss for Week 4. Brooke Carter and Teresa Whelan will also be in Queensland at the same tournament while Sam Valavanis is on a family trip away. This leaves behind Malvern East’s main centre Emma Jago and the all powerful Yuto Kawai. Although Malvern East are also needing a third to make up numbers, they are entering into the weekend retaining their main centre and strike thrower putting them in the box seat to go 8 wins from 8 games.

During the first match of Week 3, Yarraville again had difficulty in locking down their defence against Kamikaze Kawai from Malvern East bursting through at regular intervals to keep the Maroons ahead on the scoreboard. Game #9 ended with Malvern East 11-7. Game #11 rolled around and Yarraville were keen to turn the tables. They proceeded to spend 24 minutes hammering Carter on the right wing both down her line and in the gap between her and Jago attacking from all angles. Yarraville’s Mooney was key in this attack sneaking the ball from corner to corner and sending it into the gap between centre and winger while the Whelan sisters provided quick return pressure from the centre into the post. As the match clock ticked on, Malvern East began to tire. Dives were getting shorter and defensive form to the ball was becoming more lax. Fractures and errors were increasing with balls coming off the tips of both Jago and Carter’s toes bouncing away in any given direction. Even with all this mounting pressure and fractures galore, Yarraville might as well have been trying to swim up a waterfall as luck was on the side of Malvern East making miraculous saves on the goal line and finishing the game off 12-9.

Men’s Division games had some interesting results in Week 3 as well. Youth players Thientuoc Autran of South Kingsville and the Number 5 of Malvern were both away at a national training camp. This left behind Daniel Pritchard, Colin Townsend and Frank Tuiloma of South Kingsville and Sam Byrne, Dean Calder and Shaun Whitely for Malvern. The Fluros took advantage of their two pronged attacked and passed the ball around between Byrne and Whitely to even out the scoring workload. It was a luxury South Kingsville desperately needed. The Greys kept it together in Game #10 going down to Malvern 11-14 but ran out of puff by the end of the day in what would be a goal fest.

Game #12 came along and Pritchard, Townsend and Tuiloma were looking worse for wear while Byrne, Whitely and Calder gave the appearance of being fresh and ready to rumble. In total, 39 goals were scored in the 24 minutes of play. 24 of them going the way of Malvern while the remaining 15 went to South Kingsville. Not a good result by any stretch of the imagination but a better outcome than what could have happened. Mercy was on the table 3 times for South Kingsville throughout the second half but every time the Greys got back in the game, Malvern would put a couple in quick succession away and the deficit would be back to 9.

The results of Week 3 have seen the ladder space out with all sides now 2 match wins apart from one another. Yarraville will need to sturdy their ship in Week 4 if they want to keep their competition alive. With the League being a best of 17, Malvern East need only win 9 matches to claim the title of Winter League Winners. With 6 match wins already under their belt and the potential of gaining another 2 wins this weekend, time is quickly running out for Yarraville to make a come back. Visit the Facebook event for Week 4 at https://www.facebook.com/events/288046498607598/.